Brimacombe Racing Association is a non-profit ski race club for skiers aged 7-20. We belong to the Alpine Ontario “Southern Ontario Division” (SOD). Brimacombe Racing Association has been offering a race program for over 4 decades operated out of Brimacombe (formerly the Oshawa Ski Club). The program has a rich tradition of developing great skiers and racers, many of whom have returned to coach the next generation of youth. Our program is run by a dedicated group of volunteers. Program fees are kept low due, in a large part, to those volunteer efforts and by the support of our home club, Brimacombe.

Our skiers are trained by certified CSCF coaches. The program consists of dryland training, a Christmas camp, followed by weekly training, race days, and a year-end banquet.

The goal of Brimacombe Racing Association is to provide a solid foundation and knowledge base upon which to build children’s athletic abilities, and to encourage the development of ski racers of all abilities in a fun and rewarding environment.

Children who are physically active are more confident and are more likely to pursue an active lifestyle. Through competitive and recreational sport activities, our racers enjoy the benefits of being physically active, and develop into superb skiers, both on and off the race course. Ski racers become strong confident skiers, capable of enjoying a lifetime of skiing in a wide range of conditions.

Brimacombe Racing Association also provides a number of opportunities for social interaction, including team parties and an end of year banquet. 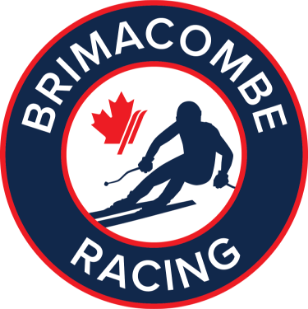